As everybody is rushing to post their Muhammad Ali stories and pictures of when they met him, (I have nothing to offer in that regard, although I would have liked to have met him), I wholeheartedly agree; he was one of a kind and a worldwide persona who transcended sports and life.

As Mr. Obama said in his statement, “Ali told us all how great he was” and he certainly backed that up. I preferred the humility of Joe Frazier, but I get it, it was his shtick.

I personally do not believe in having athletes as “heroes.” To me, that is not the definition of a hero. I’m a Namath guy…loved him as a QB, but I do not idolize or worship him. A hero is a firefighter rushing into a burning home or building to rescue people. A hero is, to me, members of the military defending our freedom. So when Jim Lampley opines that Muhammad Ali was the “only athlete ever to give up something” for his social beliefs, I would respectfully, but vehemently disagree. Many professional athletes eschewed their careers and served in our military; Boxer Jack Dempsey, Yogi Berra, Ted Williams, Jackie Robinson and numerous others made the sacrifice. And of course there is Pat Tillman. Pat was a great football player and a hero, not for his football playing ability but for what he did giving up his football career, his family, and eventually his life for this country.

Again, I totally agree that Ali was a great boxer and athlete, (however, as noted I rooted for Joe Frazier over Cassius Clay). I believe there was a heroic act at one time when he helped stop a man from jumping out of a window, I have nothing but respect for that as well. Howard Cosell had a big part in making Ali who he was and I can tell you for fact Cosell is a name that 99% of people under the age of 25 have never heard. Like I recently told my son, “vanity of vanities,” life is more than how much money you make or how many touchdowns you score. I am not saying Ali doesn’t deserve respect or should not be mourned for who he was, but the reality is–he was not a perfect person (there was only one in my book) and there’s a lot more than meets the eye and if you even do little research on what happened before the Sonny Liston fight I think you’d be surprised. (Just Google Ali vs Liston). On May 25, 1965, the two fighters met in Lewiston, Maine, the bout ended with a highly controversial first-round knockout for Clay, who by then had become a member of the Nation of Islam and taken a Muslim name, Muhammad Ali. Many people claim Liston threw the fight, (see the phantom punch) because he feared retaliation from Muslim extremists. (History.com)

On June 20, 1967, Ali was convicted of draft evasion, sentenced to five years in prison, fined $10,000 and banned from boxing for three years. He stayed out of prison as his case was appealed and returned to the ring on October 26, 1970, knocking out Jerry Quarry in Atlanta in the third round.

I wonder how many other people who evaded the draft also avoided prison time. (It is a serious question, I wonder how many people were pardoned and how many served jail time). But I’m not here to judge him for that, honestly, (and obviously) I just don’t agree that he is a hero, and I wholeheartedly disagree with his religious affiliation/beliefs. Look, I am not here to cast aspersions on the deceased “icon”…I am simply saying that to me the word hero is a sacred word and should be reserved for, well, true heroes!

Ironically, 72 years ago today (June 6th) over 50,000 men died on D-Day…no special icons on Google for it 😦 ….young men from the ages of 18-25 who may have been tremendous athletes, fathers, business men etc. never got that chance….youthful heroes the world never knew. Who knows what their lives would’ve been? But they died…

Dave Torromeo has served as the head of the Sport Business Management Program at Manhattanville College since its inception in July 2006. He has over 30 years of experience in sports business, including serving as VP of the National Football Foundation & College Hall of Fame, (NFF), 15 years in collegiate athletics and as an industry consultant. He has worked in nearly every capacity of the sports world, from a minor league team, to a D-I athletic program and the Football Foundation. He is also a consultant to the sports industry and the founder of Future Sports Business Executives. As the architect of the graduate sport and entertainment business management program, he assembled the entire curriculum, hired all adjunct professors from the sport business field and installed a top-notch advisory board with senior executives from the sports industry. He devised and implemented a graduate level internship program, brought in outstanding guest speakers including senior executives from the sports world, provided on site field study at major sports venues and created a solid mission. At the NFF he played a crucial role in awarding Jackie Robinson the Gold Medal Award, the highest honor that Foundation bestows. He was instrumental in spearheading the program that allowed athletes from colleges other than major college football entrance into the College Football Hall of Fame (players from Divisions I-AA, II, III and the NAIA) and was a catalyst behind the Foundation's "PLAY IT SMART" program; an educational program that works to turn football teams from inner city environments into learning teams, while overseeing the scholar athlete program (and a 10M endowment) that honored players from all levels and included people such as Heisman Trophy winner Danny Wuerffel, Tiki Barber, Josh Bloom, Peyton Manning and many others. Before joining the NFF, Torromeo served as a Sports Information Director (SID) and Assistant Athletic Director for Communications, Marketing, Promotions and Fund Raising for over 10 years including six at Iona College where he also received a Master's Degree. He earned his undergraduate degree(s) from the University of Rhode Island and lives in New Canaan, CT with his wife Laurie. They have two children, Stephanie a Colgate University graduate and Jarrett a senior at Gettysburg College (and "Shea" yellow lab). Dave is a lifelong New York Mets, Jets, Knicks and Islanders fan--but don't hold that against him--it just proves he is loyal!) View all posts by davetorromeo 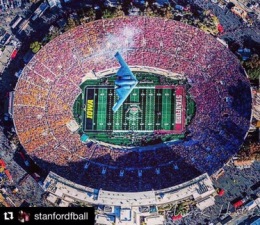